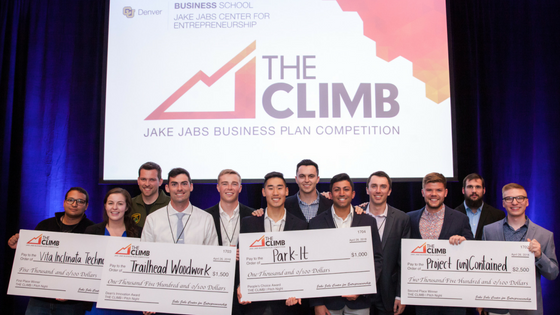 On April 26th six collegiate startup teams battled it out on stage in front of a panel of judges and a record-breaking audience of 170+ people at THE CLIMB | Pitch Night. Hosted annually by the Jake Jabs Center for Entrepreneurship, THE CLIMB is a business development challenge open to all Colorado universities. This year’s competition marked 17 years of empowering student entrepreneurs to blaze their own trail.

Vita Inclinata Technologies – a conglomerate team made up of students from CU Denver, University of Colorado Boulder, Colorado School of Mines and even the University of Maryland – won first place ($5,000). A small aerospace company, Vita is developing critical technology to mitigate cable swinging during sling load and rescue helicopter operations. After a helicopter search and rescue mission failed to rescue CEO Caleb Carr’s friend dying of a heart attack in the Oregon wilderness, the idea for Vita was born. Leveraging Vita’s technologies, helicopter operations can be 2500 percent more effective, saving thousands of lives a year.

“Winning THE CLIMB is the catalyst to making Vita successful, and ultimately save lives in two years,” said Carr. “By winning tonight, it’s bringing us that much closer to the next DARPA grant or angel raise, which is exactly where we need to be to bring our product to life.”

Passionate about making a positive impact, Project [un]Contained seeks to build a deployable, multi-purpose structure made from upcycled shipping containers and deliver them to developing countries suffering from natural disasters, refugee crises and more. Their “B[un]ker” is a hurricane and earthquake resistant structure, capable of providing reliable energy and clean water.

“It really was a team effort to make this all possible, and we had to think outside of the ‘container’ to get ourselves to this point,” said team captain and CU Denver Engineering senior Nicholas Chandler. “The money will most likely help fund our bunker prototype as well as planning a pilot program in Uganda, which we hope to launch very soon.”

“I’m very excited to use this Innovation Award money to continue to grow my business, create jobs in Colorado – specifically Denver – and be able to provide for my family,” said founder and CU Denver MBA Candidate Andrew Baker.

“We’re happy to represent the Air Force Academy as the first-ever team to win an award at THE CLIMB,” said CEO Jason Lee. “We’re really grateful that CU Denver opens up this competition to the entire state of Colorado, as it allows us to compete and share our ideas among these other awesome teams.”

Nicholas Powers, another Project [un]Contained team member and CU Denver Business School freshman, shared that the positive audience reception of their idea has given them the confidence to keep pushing and turn their dream into reality. “Having other entrepreneurs and business leaders in the region support us and believe in us has been incredibly rewarding.”